Buckthorn berries (and less so the bark) have been traditionally used for dyeing in the Middle East and the Mediterranean, later also by professional dyers in North America. I didn’t have access to the berries, but I bought the bark in the herb store and tried it. This buckthorn variety is Rhamnus frangula, other varieties exist and have been used for dyeing even more than this one. The egg on the left is the dye with alum, the one on the right is the same dye post-mordanted with iron. 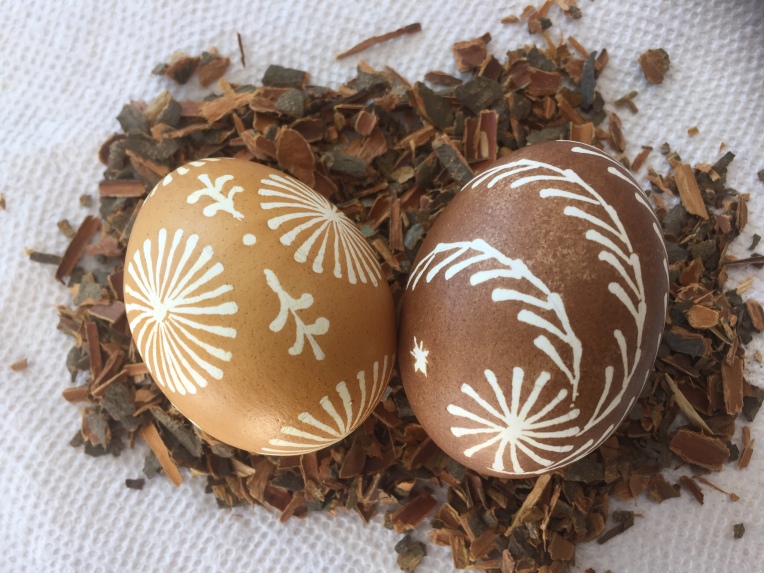 The books (Wild Color by J.Dean) say that you can extract the dye from this bark without even cooking it, by just pouring boiling water over it and soaking overnight. It is suggested to then simmer the bark again to obtain the second batch of the dye. I tried both, with more or less the same result, so you could make half a batch by soaking and the other half by simmering and then mix them together. Like most wood or bark chips, you can dry them out afterwards and try using again for lighter shades. I have also added some cream of tartar to one of the dyes, as this was suggested by Maiwa, but didn’t see much of the difference. Still it’s something worth experimenting with in the future.

The dye itself doesn’t have a very nice smell, however, unlike most natural dyes it did not spoil after sitting for months on a warm counter. I have made it in mid-December, and it still works in March. From that point, it is definitely a keeper, worth exploring more. The color is also very nice, and seems to give a lot of potential for over-laying with other colors. The iron post-wash was not particularly effective and has partially come off when the wax was removed, it might have worked better if I added the iron directly into the dye instead of soaking the egg in iron-water. I might try that next time, I actually do have two batches of this (and it doesn’t spoil!), so I can turn one of them into an iron batch.